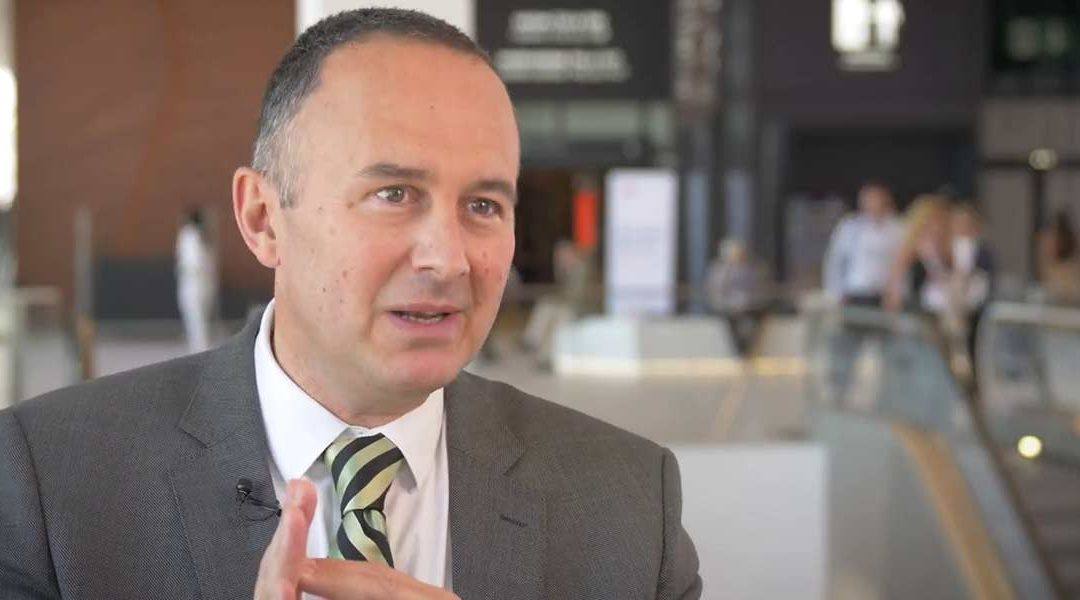 Farhad Hafezi was interviewed during ESCRS 2019, held in Paris, France, by Touch Medical Media on how CXL is performed at the slit lamp.

Transcript Cross-linking (CXL) is usually performed in the operating room. What are the advantages of performing it at the slit lamp? While we see a number of advantages, and first, you might want to divide the world into different geographic areas. If you look at developed countries, and I think one of the biggest driving reasons could be the cost of the infrastructure that is being used, because, in developed countries, we usually have access to an OR, but an operating room comes with a lot of related costs, and cross-linking is a rather lengthy procedure, in general, it takes as much time as two cataract procedures will take in one go. So taking the cross-linking procedure out of an expensive infrastructure into a less expensive infrastructure would help drive down the global cost of the procedure. Now, this accounts for developed countries, if you look into developing countries then we speak about giving access to a technology that otherwise would not be accessible readily. Let’s take remote areas of Bangladesh, where the eye doctor never gets close to an operating room, but what every healthcare professional in our field has, is a slit lamp. It’s the common denominator of our profession. So where there is a slit lamp, there can be crossing. In other words, democratizing access to the technology and providing access for all. Can a patient stay at the slit lamp for so long? That’s a question we hear a lot. The answer is… the short answer is yes. But if you look at the original Dresden protocol which would take 30 minutes, this certainly would not be feasible at the slit lamp. Now we have two main indications for performing cross-linking: it could be either keratoconus treatments or infectious keratitis treatments. Cross-linking for keratoconus has been performed for more than 20 years now, and the currently widely accepted protocols perform cross-linking in any setting, whether it be at the slit lamp or in an operating theatre in the lying position, safely at 8 to 10 minutes. So, if you are confident that your patient will be able to stand still at the slit lamp for 8 to 10 minutes, you could perform cross-linking at the slit lamp from now on. If you look into keratitis protocols, we now have functioning protocols at 4 minutes only, because we can highly accelerate the keratitis treatment as it is oxygen-independent, and 240 seconds at the slit lamp should suffice, and this, I think, is very realistic. But it also means that you need to identify your patients and ask yourself the question: will this specific patient be able to stand still for either four (keratitis) or 8 to 10 minutes (as an ectasia)? And I, for sure, would never try to cross-link a teenager or a child simply because they would never stand still for so long. Does CXL at the slit lamp carry a risk of infection? The risk of infection is the second most common question we get. Well, I would like to point to the fact that we know much more about cross-linking mechanisms than we used to do 15 to 20 years ago. In the early days, we thought all CXL does is stiffen the cornea. We know now that there are three additional mechanisms that occur in every single CXL procedure, whether it be keratoconus or keratitis. It doesn’t only stiffen, CXL increases the resistance to digestion, it stops the replication of any living cell within the cornea by intercalating with the DNA and RNA, and it also creates a huge amount of free radicals, which translates into stress to cellular membranes. It just unspecifically kills any living cell. And what many forget is this is not only happening in keratitis treatment, it happens in every keratoconus treatment. At the end of a keratoconus treatment, your cornea is sterile. So after these eight or ten minutes spent at the slit-lamp, you’re looking at a sterile surface. It’s even more sterile than the unfortunate patient who comes into your normal routine consultation telling you my little kid has stretched my cornea, look, look it’s all scratchy, and it’s an open surface. That cornea is more infected than a cornea at the end of the procedure, and this is why we are very confident that we shouldn’t see an increase in related complications when we take the technology to slit lamp. How does the patient’s position affect riboflavin distribution? This was one of the other issues my colleagues were worried about: what happens if you are in the upright position? Wouldn’t riboflavin distribution change due to gravity alone? We tested this, and we published the data two years ago. Well, it was a straightforward experiment where we determined riboflavin distribution in a vertical position – in the upright position – and even after 60 minutes – a full hour of vertical positioning – the gradient between the upper and the lower cornea in terms of riboflavin concentration was 5% only. And we never need one hour for treating, we need four to ten minutes, so you’re totally safe with regard to riboflavin distribution. How has the effectiveness of CXL at the slit lamp been demonstrated? That’s another good question. Well, my counter-question would be: why would it behave any differently whether you are in an upright or a lying position? Because the technical settings used are absolutely identical to everything that has been used in the past 20 years in the lying position, and we speak of roughly 200,000 procedures performed every year. The only difference is the positioning: riboflavin distribution is not affected, it doesn’t matter to any UV beam whether it’s directed in a horizontal or a vertical manner, so I do not expect any difference in the outcomes that are related to the positioning alone.