Members of ELZA have performed research on intraocular lens technology and were consultants to industry for the market introduction of blue light-blocking lenses in Europe. ELZA has access to the most modern version of cataract surgery, femtosecond laser-assisted cataract surgery (FLACS).

This depends primarily on how much ultraviolet light the eye has been exposed to in the course of life, and especially in youth. People from sun-rich countries, such as those around the Mediterranean sea, often develop a cataract in their mid-fifties. Cataract is therefore not a disease, but a natural symptom of aging.

A healthy lens is clear, but in a cataract, the lens of the eye gradually becomes harder as well as cloudier, allowing less light to pass, making it harder to see. If we compare the natural lens with the lens of a camera, one can say that the lens is severely scratched and clouded. The result is a bad, blurry and cloudy image.

Although relatively easy to remedy by surgery, cataract is the most common cause of blindness in the world, as in poorer countries most people can not afford such an operation.

Cataract surgery has accompanied mankind throughout history. Two famous examples are “The March of the Blind“ by Pieter Brueghel, painted in 1568, and illustrations showing how cataracts were removed in the Middle Ages. 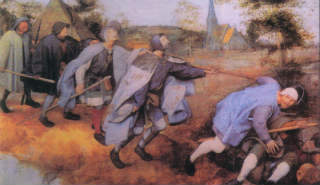 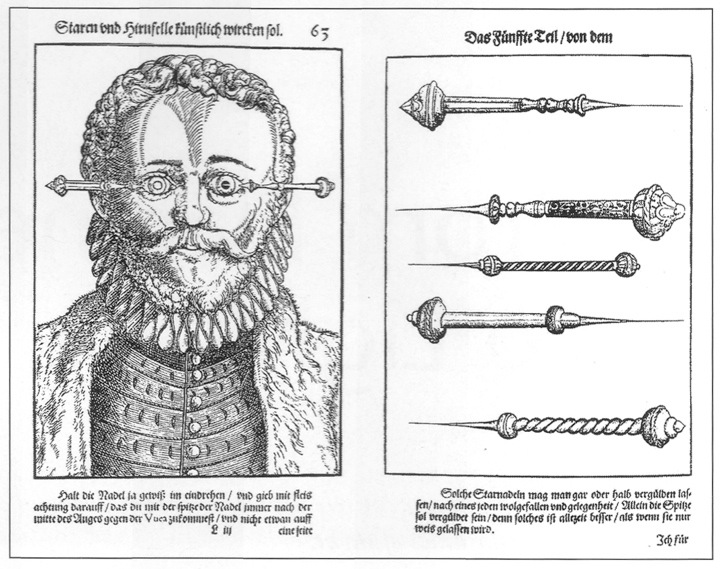 Cataract surgery in the middle ages

What are the symptoms ?

Early symptoms include increased glare, an increased need for intense light to read, and a prolonged adaptation time when changing the environmental lighting. At later stages, visual acuity gradually decreases and, theoretically, if not operated, would lead to legal blindness, simply because the lens in the eye has become opaque.

In later stages of cataract development, people’s visual acuity gradually decreases to the point where it cannot be properly corrected with glasses. The lens becomes compressed, making the patient more short-sighted, sometimes making it temporarily possible for people to see objects close to them (such as a book or a newspaper) without reading glasses. This effect does not last long; if left untreated, cataract can lead to blindness.

How are cataracts treated ?

Cataracts are treated by removing the cloudy, natural lens, and by replacing it with an artificial intraocular lens (IOL).

There are different types of IOLs:

Monofocal IOLs have one point of focus, either distance or close up.

Multifocal IOLs provide two or more points of focus and are designed to reduce the dependence on reading glasses as a result of presbyopia.

Toric IOLs are designed to correct astigmatism, potentially reducing the need for glasses.

Modern cataract surgery is performed using ultrasound energy to fragment the lens. The small fragments are then aspirated through a circular opening in the capsular bag that is created by the surgeon. It is very important that this “capsulorrhexis” is perfectly round and centered, to allow for proper placement of the IOL.

Conventional cataract surgery, without the laser, can be effective when performed by a skilled surgeon, but femtosecond laser-assisted cataract surgery (FLACS) procedures are generally more predictable and precise. Laser technology can automate certain steps during the procedure with – no pun intended – laser precision.

FLACS is a high-tech procedure, and we are proud to be one of the first practices in Switzerland to this technology. The femtosecond laser is used in addition to conventional surgery, and is currently not covered by health insurance.

See an example real-time FLACS surgery below. It takes approximately 10 minutes, and was one of the first FLACS cases (performed in 2012). We use the Swiss-made FEMTO LDV Z8 laser from Ziemer Technologies, a world leader in femtosecond technology. When is the best time to have cataracts removed?

People often believe that a cataract must be in a highly advanced stage to be removed, but this isn’t true. When your eyecare specialist sees signs of a cataract and you start to experience visual symptoms, you should ask about your treatment options, so that the cataract doesn’t infringe on your lifestyle.

What happens if cataracts go untreated?

If left untreated, the cloudy area in your lens will continue to grow. The speed at which cataracts develop varies, but eventually your entire lens can become clouded, in effect, causing blindness.

How do I know which replacement lens is right for me?

The replacement lenses, known as intraocular lenses (IOLs), that you receive during cataract surgery are chosen beforehand, depending on your lifestyle and your visual needs. Your surgeon will make a recommendation, but it’s a good idea to familiarize yourself with the concepts and types multifocal lenses, astigmatism-correcting lenses, and monofocal lenses available so you can have an informed discussion about your options.

Will I be awake during the surgery?

Yes. Your surgeon will offer you medication to help you relax and take steps to make sure you don’t feel any pain.

How long does cataract surgery last?

The procedure typically lasts between 15 and 30 minutes, though it may be two to three hours from when you check in until you leave your surgeon’s office.

Can I wear eye make-up before surgery?

Eye make-up can contain particles and bacteria (particularly eyeliner and mascara) so we ask you to stop applying make-up three days prior to surgery and for one week after.

If I am using eye medications in my eye operated on, do I stop taking them?

Continue all eye medications through the day before your surgery. Do not use eye medications in the eye that is to be operated on the day of surgery. Eye drops for the fellow eye should be continued as usual.

EN
DE |
We use cookies to ensure that we give you the best experience on our website. If you continue to use this site we will assume that you are happy with it.Ok