Eye rubbing and keratoconus: the forces applied when rubbing eyes

ELZA’s surgeons, researchers, and its colleagues decided to measure the mechanical forces applied to the eyelids when people rub their eyes, and the results of their investigation have been published in the journal, BMC Ophthalmology (1).

People rub their eyes in three different ways: with their fingertips, their knuckles, and with their fingernails. We found that of the 57 patients we examined, 51% were fingertip rubbers, 44% were knuckle rubbers, and the remaining 6% were fingernail rubbers. When we measured how much force was applied during rubbing, we found that, on average, knuckle rubbing applied significantly more force to the eyelids (9.6 N) than fingertip rubbing (4.3 N) or fingernail rubbing (2.6 N). In other words, knuckle-rubbing applies 2.2 and 3.7 times more force to the eyelid (and through that, the cornea underneath) than fingertip or fingernail rubbing.

The reason why we wished to obtain this knowledge was to incorporate it into our ongoing research in building an experimental rubbing model, which aims to investigate the effect of repeated rubbing of the eye on the strength of the cornea, and whether there is any correlation between the ways people rub their eyes, the force applied, and how many times a cornea needs to be rubbed before the cornea becomes weakened. This experimental work will be the first step in answering the question, once and for all, if eye rubbing and keratoconus development – not just progression – are linked.

To read the paper, click on the image below: 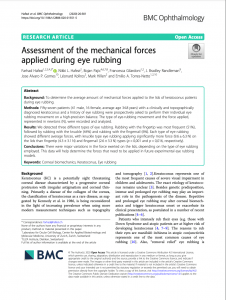 PrevPreviousCXL in thin corneas with the sub400 protocol: paper now published
NextCross-Linking at the Slit Lamp technique: Now published in the JRSNext