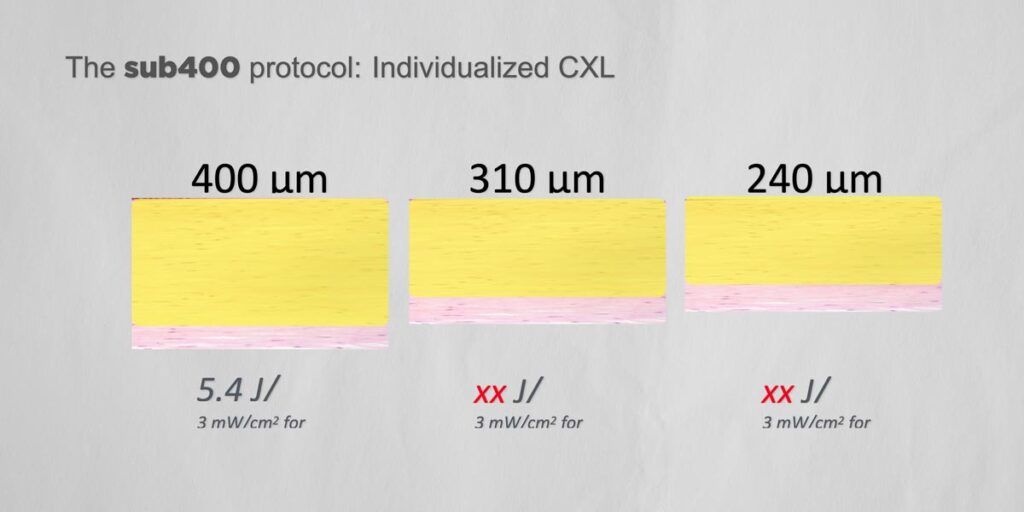 Keeping it simple: cross-linking ultra-thin corneas down to 215 µm of stroma

Thin corneas with keratoconus have been a real problem to treat in the past. The classical, gold-standard Dresden Protocol (1) mandated a 400 µm stromal thickness limit to protect the underlying corneal endothelial cells – approximately the first 300 µm of the cornea are cross-linked, with at least 100 µm remaining below it as a safety margin. So it is easy to cross-link an early keratoconic cornea with a decent thickness of more than 400 µm. But what about an advanced case, where the cornea is ~250 µm

Several groups have tried to solve that problem (Figure 1a). At the ELZA Institute in Zurich, we developed a technique where the stroma was swollen with hypo-osmolaric riboflavin to a thickness greater than 400 µm prior to cross-linking (2). Soosan Jacob developed contact lens-assisted cross-linking to “thicken” the cornea with a contact lens (3), and Cosimo Mazzotta proposed leaving islands of epithelium over the thinnest parts of the cornea as an alternative method (4). I no longer swell corneas nor perform contact lens-assisted CXL, because both of these techniques have clear disadvantages. When using the hypo-osmolaric approach, the extent of swelling of the cornea is unpredictable, and no surgeon likes a surprise during the procedure (2). When performing the contact lens-assisted approach, we showed that the diffusion of oxygen into the stroma is hindered and efficacy is reduced by approximately 30% (5).

Therefore, we have developed a new approach (Figure 1b) that avoids those drawbacks; one that instead of modifying the thickness, modifies the total amount of UV energy applied to the cornea, based on each patient’s own corneal thickness, meaning that the depth of the cross-linking effect can be modulated to give as much cross-linking as possible while retaining a safety margin that protects the endothelium.

The process can be standardized: remove the epithelium, apply the riboflavin, then measure corneal thickness with an ultrasound pachymeter immediately before irradiation. Once our study data are published, the surgeon will have a table at hand that tells you the duration and intensity (at either 3 mW/cm² or 9 mW/cm² irradiation settings) of illumination required to safely cross-link that cornea. This is individualized cross-linking without additional factors that can introduce variability or compromise cross-linking efficacy.

Figure 1 a. Status quo treatment approaches in corneas of various thicknesses (corneas <330 μm are generally considered to be too thin to cross-link even with modified protocols); b. Proposed approach of modifying UV illumination time to perform a safe amount of cross-linking in corneas thinner than 400 μm.

We tested our algorithm in a prospective monocentric study here at the ELZA Institute in Switzerland (Figure 2). The study involved 46 eyes with a one-year of follow up, with the thinnest cornea being 214 µm, and the manuscript describing the results is currently in press, but the headline result is that we had a success rate of 90%, even though many of these corneas would have been considered too thin to cross-link by previous thin-cornea cross-linking protocols, and would almost certainly have required corneal transplantation. Moving forward, we took this approach and applied it to a keratoglobus cornea that had a minimum thickness of approximately 210 µm and have observed that the corneal topography has remained stable after the cross-linking was performed.

There is another proposed protocol that was published recently by Cosima Mazzotta: the M protocol (6). This protocol puts together all available high-quality evidence on the depth of the demarcation line achieved with different cross-linking protocols, meaning you can choose from a list of protocols to achieve the desired amount of cross-linking. This differs from the sub400 approach in terms of its complexity. To be able to perform all of the different protocols present in the M protocol, a surgeon needs a cross-linking device that can output UV energy at 3, 9, 15, and even 30 mW/cm², using either continuous light or pulsed light protocols, and in some cases, the surgeon also needs to have the ability to perform iontophoresis to apply the riboflavin. Our philosophy is: keep it simple. The sub400 protocol can be used with any existing cross-linking device; the new, portable C-Eye cross-linking device is currently the only instrument that has the sub400 protocol built in to the device.

With sub400, all you need is one type of riboflavin and a 3 mW/cm² machine. (If you have a machine capable of 9 mW/cm², we also have that covered in a separate table in the sub400 algorithm). The sub400 protocol should make cross-linking far easier than it has been in the past, and has clear advantages over older swelling and contact lens assisted cross-linking approaches, and we look forward to making the algorithm available to all very soon.